Make Your Intranet
Accessible to Everyone

This month’s Snapshot is filled to the brim with
exciting news and events.

Dear ShortPoint Community,
‍
In this Snapshot, we review the major events and highlights of 2022. With wide smiles and fulfilled hearts, we celebrate our achievements with you. 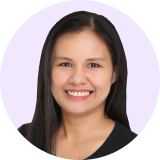 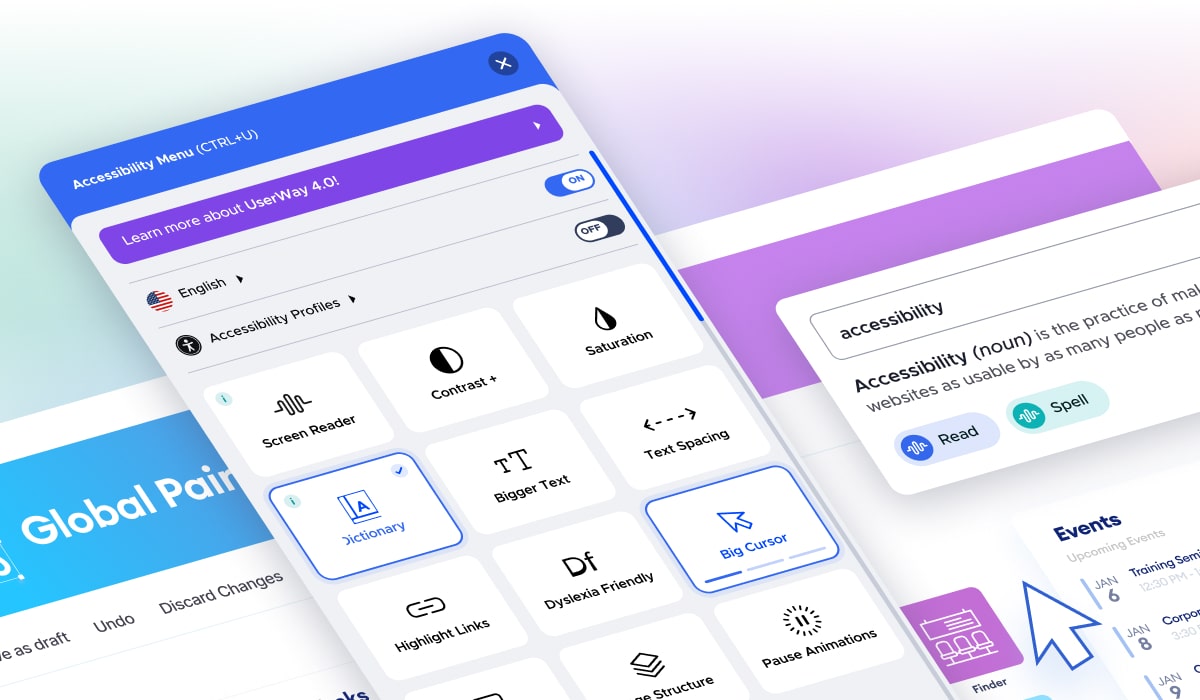 In February, we introduced ShortPoint Accessibility in partnership with UserWay. It is an AI-powered accessibility solution that automatically scans, fixes, and monitors accessibility violations across all intranet site pages. It brings to intranets the most advanced technology available to remediate accessibility issues and guarantee compliance with WCAG, ADA, and other international accessibility standards. It quickly provides a comprehensive compliance report that provides insights into which areas require careful attention and indicates recommendations where manual intervention is needed.

The solution also comes with a visible widget that engages intranet users to customize site pages according to their accessibility needs. In just a few clicks, users can take advantage of state-of-the-art facilities that provide comfort and ease of use in accessing important resources for their job. This interface also records usage statistics that inform leadership on how to improve the efficiency and effectiveness of company intranets.

ShortPoint Accessibility can now be enabled directly in our product. Check out our Knowledge Base to learn more about it. 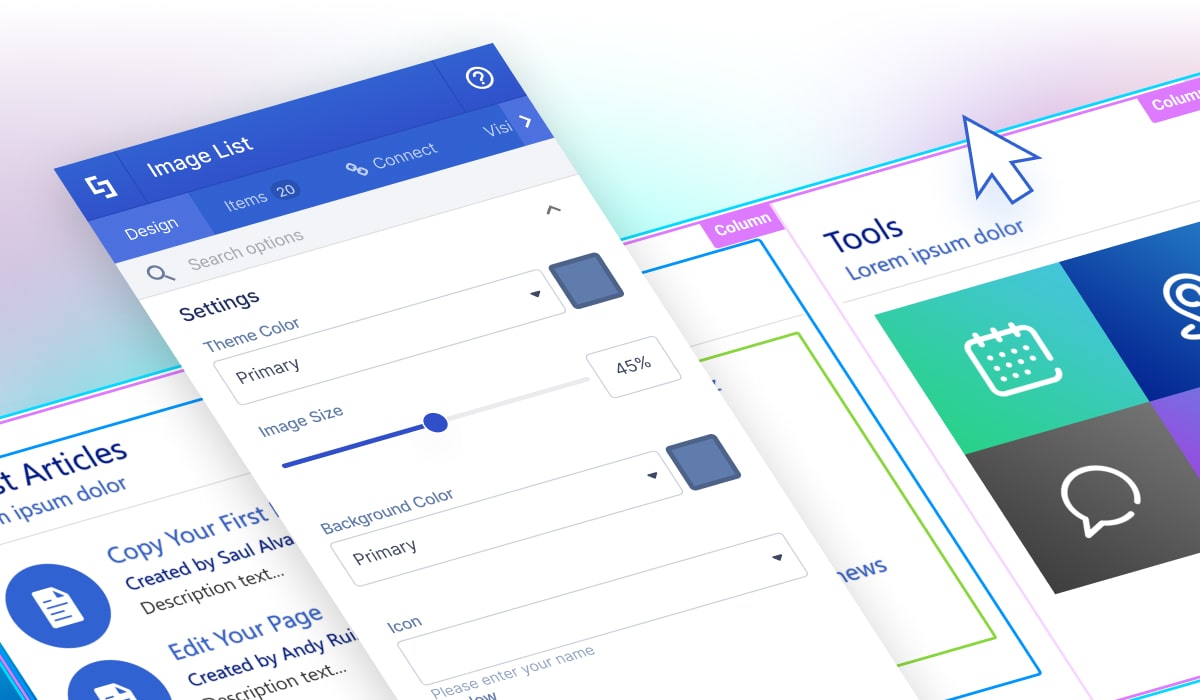 In July we launched ShortPoint Live Mode. We had a record number of participants in the Launch Party/webinar and we saw several early adopters take a step toward a fully visual intranet design experience. Since then, we have released Live Mode to our existing customers in waves.

ShortPoint Live Mode is a new editing interface that allows users to design intranet pages while seeing the changes and results live and in real-time. This makes adjusting the layout of the page, adding new Design Elements, inserting content, and editing the page more intuitive and effortless. It removes a lot of the guesswork on how content will be presented on the page which primarily happens when working with the wireframe experience.

New features are also introduced with Live Mode. This includes Hot Actions which allows users to adjust the spacing between and within Design Elements directly on the page, Inline Text Editing which allows users to edit text right on the page, and the Floating Page Setting Bar which provides quick access to the commonly used actions when editing in ShortPoint just to name a few.

We look forward to seeing our customers enjoy Live Mode. If you want to know more, we have resources about Live Mode that are available to you anytime. 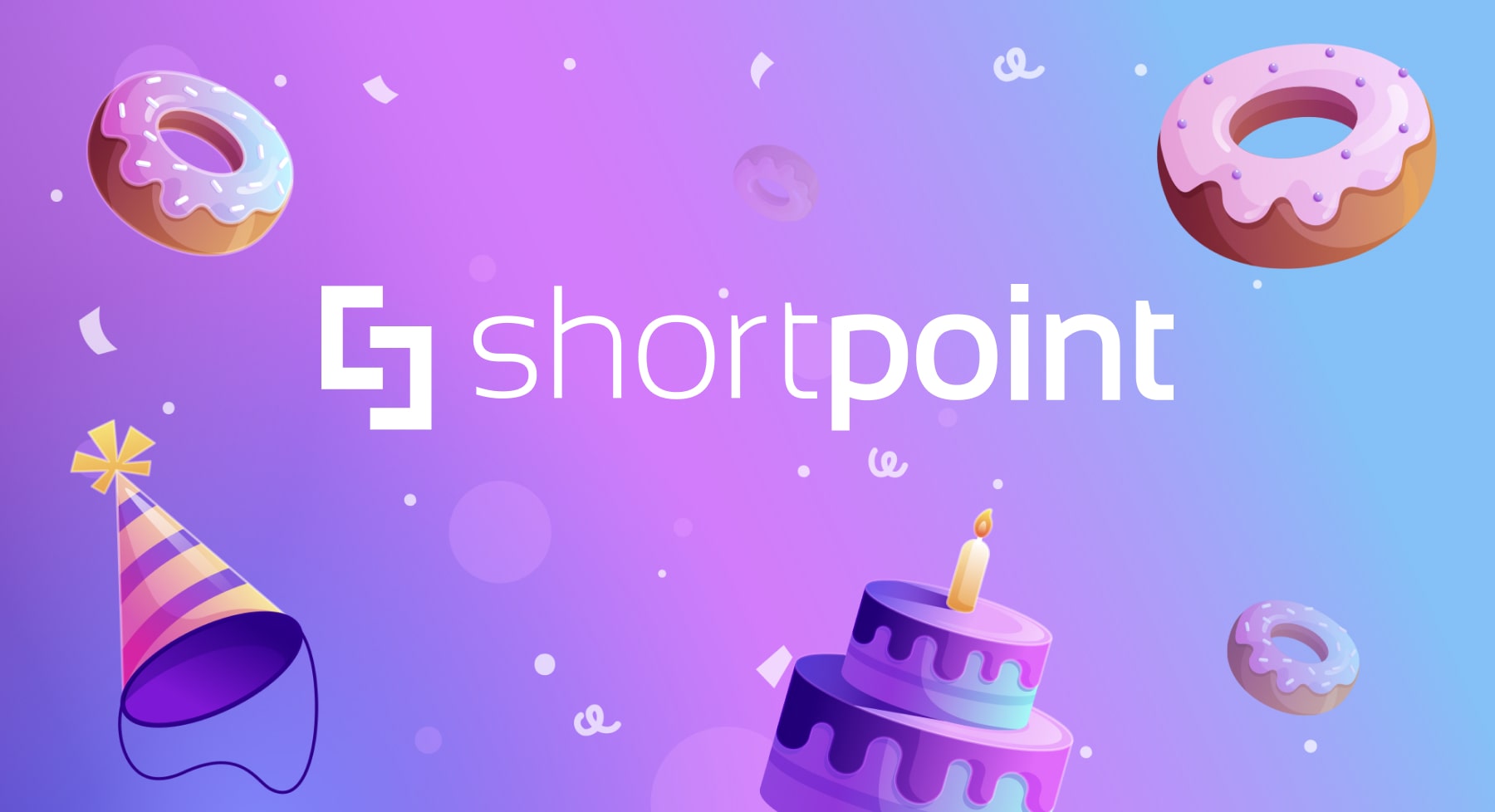 We set ambitious goals outside of product development at the start of 2022 and we had a pretty exciting year as we worked to achieve them one by one. We believe that strength in teamwork, customer support, security and compliance, and first-user experience are valuable as they are important in providing the best service to you, our customers. We celebrate these achievements as we end a truly wonderful year.
‍
ShortPoint is a Great Place to Work

In April, we gained our certification as a Great Place to WorkR and we received insights as to how our team makes a difference. Two months later, we received further affirmation of our excellent culture as we ranked 4th out of 15 Best WorkplacesTM in Technology in the Gulf Cooperation Countries (GCC). This is a feat we will strive to maintain and exceed in the following year.

We announced the shift to a new Feature Requests Site in July. It is a new interface that is intuitive and user-friendly. It provides a better experience in submitting feature requests, monitoring progress, and interacting with other customers who have their own brilliant ideas to improve ShortPoint functionality. It also has an upvoting system that allows us to see which suggested features matter most to our customers. We continue to listen to your feedback and suggestions and work on improving ShortPoint through this site.

There is no better way to showcase that at ShortPoint We Think Security than to undergo rigorous certification processes and comply with internationally recognised information security standards. In August, we gained our Soc 2 Type 2 certification and received the corresponding report that highlighted the security practices at ShortPoint. We continue to maintain these best practices as well as aim to gain other security certifications through to next year.

This year, we undertook the challenge to improve first-time user experience. We are taking small steps and this led to releasing ShortPoint Polar. It allows customers to automatically install and activate ShortPoint. This effectively reduces the time spent from installation to activation to within 2-3 minutes. We hope to do more improvements in the coming months.

As we wrap up the year 2022, we want to thank you for your continued support and generosity in providing feedback. At ShortPoint, this drives us to build a better product and provide excellent service at all times. We look forward to serving you in 2023.

Spotlight Is On Scott, Our Chief Marketing Officer What better way to capture and promote ShortPoint’s unique and creative brand than to get someone who embodies these characteristics. Let us take a quick look at what inspires ShortPoint's Chief Marketing Officer, Scott Lysz.

Scott's main focus at ShortPoint is to gain exposure for the ShortPoint brand whether this is outlining website search optimization, writing press releases or putting on a bear costume. Yes, you read that right. Scott is Kevin the Bear, which just goes to show how committed he is to helping people understand how awesome ShortPoint is.

Although Scott may be seen as a bear pack of one, he is outspoken about the amazing Shortpoint team. Every day, he is able to bring his ideas to the table and trusts that they will be made even better by the team he has around him. “Any success we have, we have together,” he says. “I don’t think that’s something most companies can say, but it’s true at ShortPoint.”

Scott is a family man with two beautiful daughters and an amazing wife. Outside of work, he spends most of his time telling his kids that they need to eat their dinner or that it’s really time to go to bed and he is not kidding. When he has time for himself, he can be found being ridiculous with his wife, riding his mountain bike on flow and jump trails, doing something extreme that may result in an injury, or doing some woodworking. Scott loves to dive deep into analytics and then discuss data-driven attribution with his wife, who is a data scientist. Nerd Alert!

In addition to Scott's family life and ShortPoint, he loves to play hockey and plays five musical instruments and has performed in over 30 theatrical productions and 20 viral videos. As a writer, Scott has contributed content to several publications and outlets including Forbes, the Huffington Post, NBC, and TBS. If you're looking to find Scott on a Saturday, it is likely that he's playing a competitive game made on-the-spot or trying to make his family and friends laugh.

See you in January

More exciting news is planned for January. Stay tuned! And if you have any questions, suggestions, or feedback, please send us a note. We love to hear from you.

See you next month, ShortPoint hero! 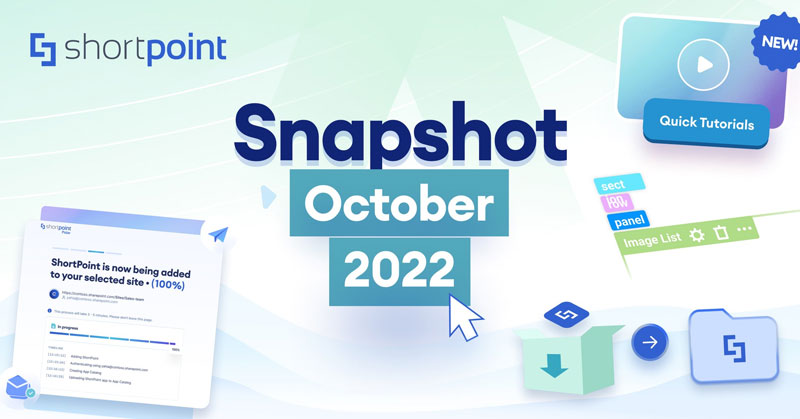 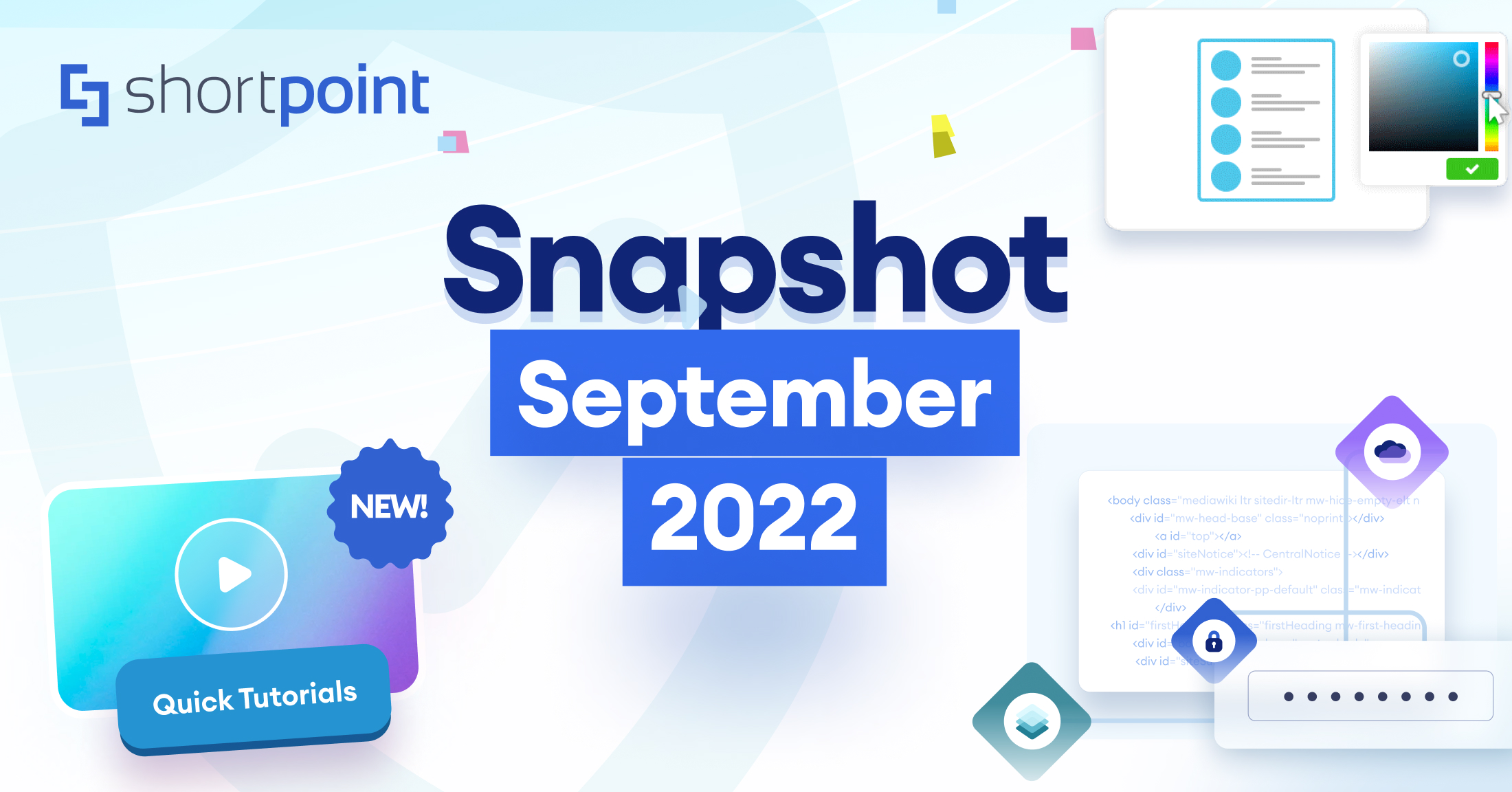 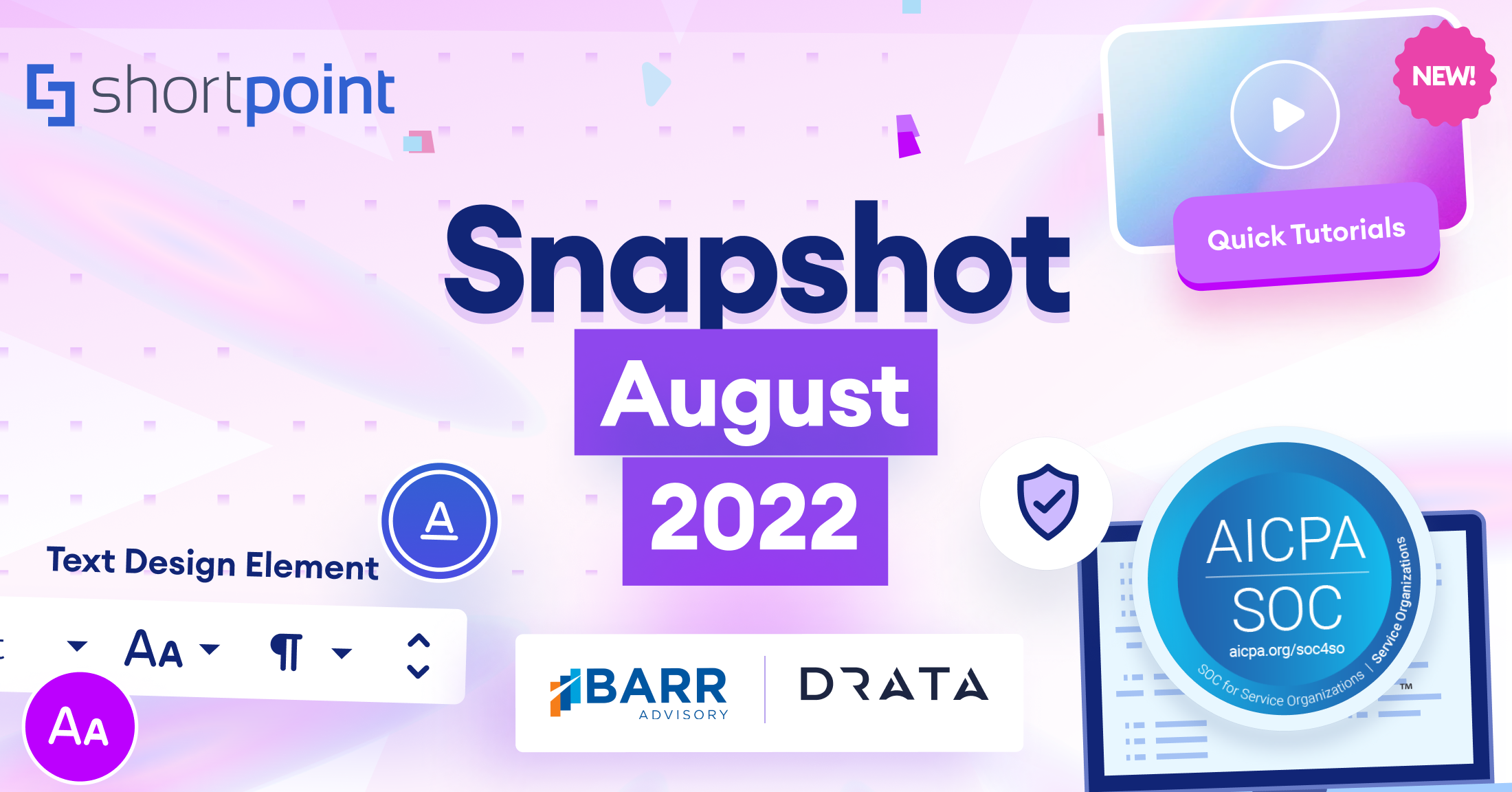 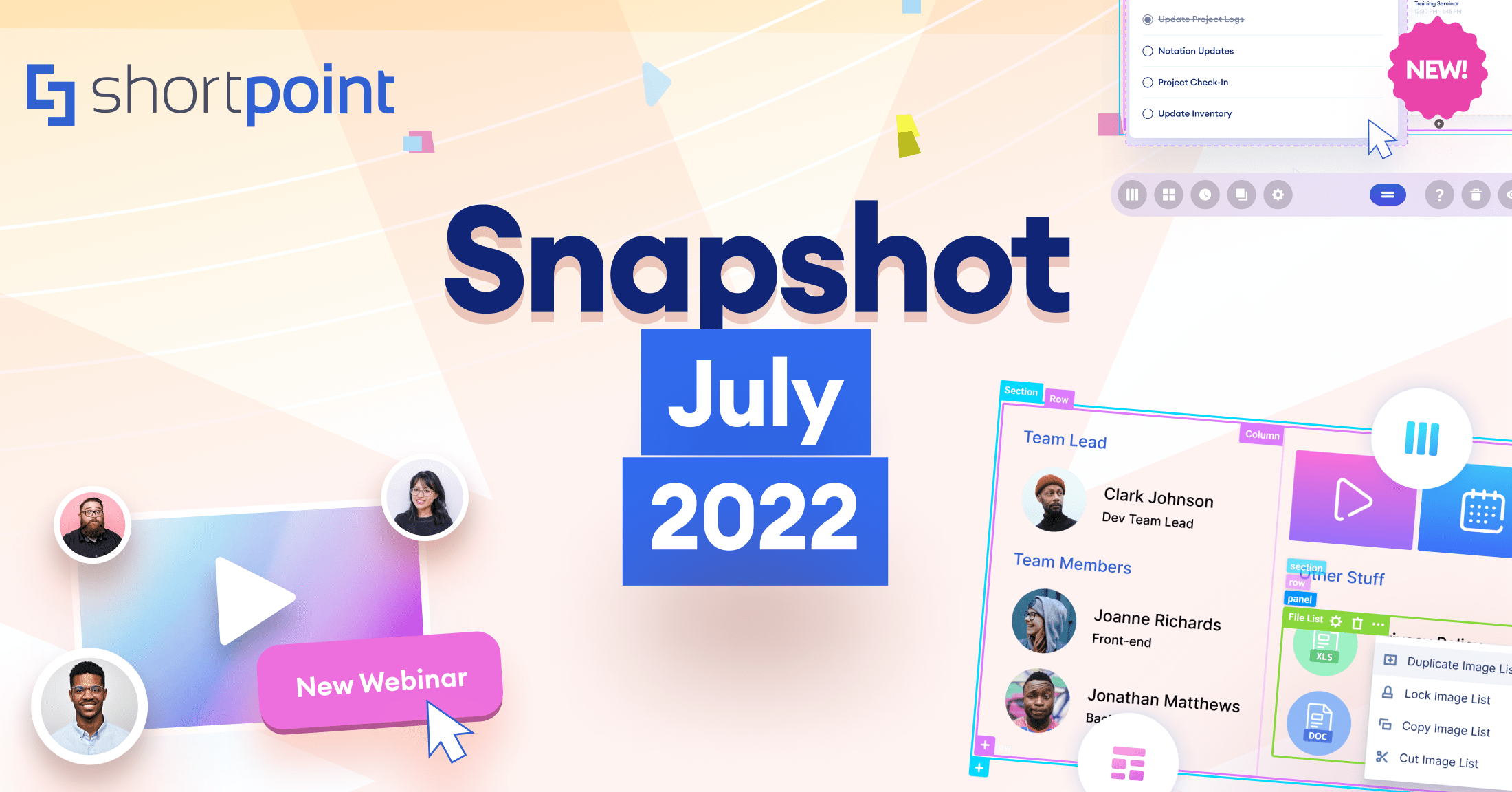 Ignite your vision. Install ShortPoint directly on your site, or play in sandbox mode. No credit card required.